Gonzales is gonna get the extra special oversized Medal of Freedom and an Escalade. - Grant Gerver, www.seriouskidding.com 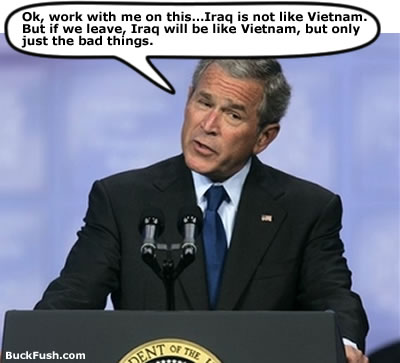 It was this month in 1974 that Richard Nixon resigned the presidency after getting caught lying and violating the constitution. Remember when that kind of thing used to get you kicked out of office! Thank God those days are gone. - Jay Leno

Sic 'em With the Rally Squad
And other tips for dealing with demonstrators from the Presidential Advance Manual.

9:05AM         INVOCATION and Salute to Reverend Jerry Falwell by Reverend Donald Wildmon.

10:00:02AM  ECONOMY – Aren't we doing well? Those stupid schmucks who voted for us then took a subprime mortgage. The fools are still waiting for Reagan's Tax Cuts for the Super-Rich to trickle-down to them. Just keep telling them…it's coming. - President George W. Bush.

11:30AM       SHREDDING THE CONSTITUTION, A Progress Report by Attorney General Alberto Gonzales.

12N              LUNCH provided by HALLIBURTON (Do not worry, they are not serving the tainted food that they serve our fighting men in women in Iraq).

1PM             FASHION THAT PLEASES GOD or Hemlines will fall 4" below the knee. A fashion show featuring 9-11 Mayor Rudy Giuliani and his fall fashions.

1:23PM         FASHION THAT KEEPS YOU DRY First Lady Laura Bush provides insight showing the benefits of Scotchguarding your pants, with a film entitled, " When you don't have 7 minutes to let pee dry".

2:30PM         POVERTY – This may be cancelled since we can't find a single Republican interested in poor people. Replacement program: MORE TAX CUTS FOR THE RICH, we are still reviewing our 146,947 applications for this seminar.

3:30PM         CIVIL RIGHTS – Good time to call your DC Madam and make an appointment for later. Smoking is not permitted in the building, you have amble time to go outside to smoke or go for a beverage, shopping, a brisk walk or get your nails done. The next 15 minutes are going to be very quiet in here.

3:45PM         WAR ON DRUGS – Rush Limbaugh provides us with insight on the functioning drug addict.

5PM             FOREIGN POLICY, All OPEC Nations have WMD's, they are developing nuclear weapons, they are an immediate threat to the USA and their people hate us for our freedoms) – EXXON/Mobil Corporation.

1.      Please do not mention Osama Bin Laden's name, we want America to forget, just change the subject to Hillary's cleavage.

2.      Be on time tomorrow morning for our moving salute to Senator Joseph P. McCarthy.

Republican presidential candidate Duncan Hunter revealed that he drives a Chevy Suburban with 274,000 miles on it. Yeah, despite all those miles, the Suburban still has a much better chance of making it to the '08 election than Duncan Hunter. - Conan O'Brien

Long time no email! You may recall my email to you re: Joe Scarborough getting away with murder.

Anyway, I was once a huge Joe Scarborough fan. That is, when he was a real conservative. Something (murder and money?) happened on the way to MSNBC's late night show replacing Imus, and you have helped a lot in the forming of my current opinions of Mr. S. Thank you so much!!

As I said, I was ONCE a huge Scarborough fan--I was hoping he would be a VP choice in '08. But, as they say, things happen. You are absolutely correct--the police and Mr. S's resignation--and the Press's refusal to investigate this poor gal's death was enough to change my opinion of Mr. S. That he's suing you or about to is ridiculous. Keep me posted on what happens.

You're obviously a liberal, and that is fine. So is most of my family!! I was too, for about 25 years. I even went so far as to work for Jerry Brown in his run in '92 against Clinton. But, as I've already said, things happen! The Party "left me" by going so far to the left that I was a minority. The gay and lesbo lobby and the La Razas took the Party over. It was time to leave. After 4 years as a Repub, I left to become an Indy con. And that's where I stand today. The Invasion fr. Mexico is MY hot-button issue, the issue that is taking over the country.

Something happened to conservative Joe Scarborough. Maybe it was his going to work for ultra-liberal MSNBC, I don't know. But he changed. Now he's hugging liberals and leftists and is making gazillions. He stopped representing my views a long time ago. He's about as disgusting a personality as I've ever seen.

But even if he were still a conservative Republican (he has openly stated lately that he's a Libertarian), I'd want him to face justice in the death of his former intern. Because to me, justice is everything. Without it, as with OJ, anarchy beckons.

Why in the world would you think Scarborough killed his aide? I offer no such opinion as that on my website, in fact, I say just the opposite. Have you even read my webpage on Joe?

I feel that Scarborough is too stupid to commit a murder and cover it up.  But he's not too stupid to be an opportunist....it's all about Joe and Joe alone. I always knew the lack of coverage of his aides death would haunt him. If the national media investigated Joe as they did with Gary Condit/Chandra Levy, my webpage about him wouldn't even exist.

MSNBC is ultra-liberal? Please. MSNBC fired Phil Donahue in 2003, who was their highest rated show, and replaced him with Michael Savage and eventually Scarborough. . Click here to read Donahue's comments on his firing. Why would an "ultra liberal" TV station fire it's highest ranked talk show host? You can't have it both ways.

You think I am "obviously a liberal"? I couldn't possibly be a card carrying Liberal, I own too many guns. ;)

Did you have a good time today?  Please donate

Thank you to all who have donated and those who want to! If you can't donate, just spread the good word about All Hat No Cattle!

In this image provided by NASA shows a newly expanded image of the Helix nebula Friday Aug. 24, 2007 lending a festive touch to the fourth anniversary of the launch of NASA's Spitzer Space Telescope. This spectacular object, a dying star unraveling into space, is a favorite of amateur and professional astronomers alike. Spitzer has mapped the expansive outer structure of the six-light-year-wide nebula, and probed the inner region around the central dead star to reveal what appears to be a planetary system that survived the star's chaotic death throes. Spitzer launched from Cape Canaveral, Fla., on August 25, 2003. Photo/NASA-JPL