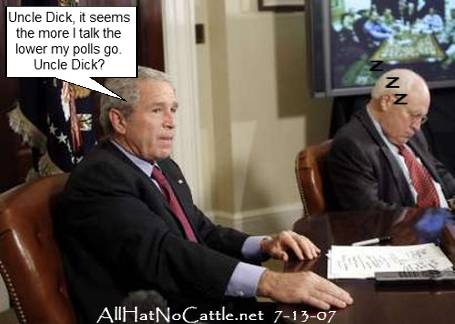 Stupid is as stupid does - Forrest Gump

"And Colin Powell said this week he once spent two and a half hours trying to talk President Bush out of going to war in Iraq. Well actually, the first hour and a half were spent trying to get Bush to put down the Gameboy." --Jay Leno

President Bush always said he would wait to talk about the CIA leak case until after the investigation into his administration's role. On Thursday, he skipped over that step and pronounced the matter old news hardly worth discussing. 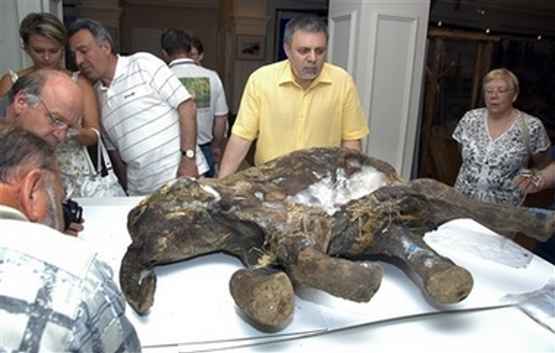 Scientists examine the withered carcass of the once vibrant GOP which succumbed due to an unhealthy diet of hubris, cronyism, corruption and prevarication. The remains, severely decomposed, emit an unbelievable stench.

Thank you so much for writing!

"Well now more problems with this Vitter guy. You gotta go on his website, he's like Mr. Religious, Mr. Family Values. Well now a second madam has come forward and told the Associated Press that he was also a customer at her brothel. This guy was cheating on his hooker with another hooker." --Jay Leno

I had the great fortune to work on the Florida Flambeau with Doug Marlette. He had star power even then and drew some of the most powerful anti-war cartoons I have ever seen before or since. His death leaves a gap in the ranks of those (including you, Lisa) who have defended our hard-won freedom from those who would sell it cheaply for the illusion of safety and financial gain. He will be missed.

I agree, Doug Marlette's anti-war cartoons back then touched my heart. And your kind words touched me too.

Thank you so much for writing.

"And this madam says that Vitter was not only having sex with the prostitutes -- this is unbelievable -- he would also pay them to dress him up in a diaper. See, that's what you call a pampered politician. And she also said today in an interview that he sometimes paid $300 an hour just to have the hookers talk to him because his wife didn't listen to him. Well, I bet she's all ears now." --Jay Leno

Thanks to Dick S!

"Here in Los Angeles, it turns out our Mayor Antonio Villaraigosa was having a long time affair with a Telemundo reporter -- the reporter who covered him for the news. And typical of a politician he didn't actually admit it, he said he was illegally south of her border." --Jay Leno

"Officials in Iran have announced that a man convicted of adultery there has been stoned to death. ... Imagine if they did that in Washington, they'd be out of stones like the first week." --Jay Leno

A House Judiciary subcommittee on Thursday took the first step to begin contempt proceedings against Harriet E. Miers, the former White House counsel, who defied a subpoena to appear at a hearing on the firing of eight federal prosecutors.

"The pope announced that the Catholic Church provides the only true path to salvation and that other Christian groups are either defective or not true churches. Yeah, the pope finished by saying that 'God loves everyone, but he loves me more.'" --Conan O'Brien

Did you have a good time today?

Please support All Hat No Cattle

A"Wing-In-Ground" (WIG) aircraft, designed by the scientific research crew of Tongji University in Shanghai, is seen in this undated handout. The plane can fly as low as half a metre (1 ft 7 ins) off the surface, hitting speeds of up to 300 km (180 miles) per hour and can carry up to 4 tonnes on takeoff, state media reported. Photo/China Daily