Rewarding failure seems be the mantra of this administration. The arrogance of Condoleezza Rice bringing the failed Paul Wolfowitz back into the fold is stunning. I suppose he'll advise that a war with Iran will pay for itself -- all the while combing his hair with his own spit.

Condi Rice was reported Monday to be ready to appoint Paul Wolfowitz chairman of her panel on arms control. His job will be to monitor Iran and North Korea. We need a man with proven ability to misinterpret intelligence and start a war for no reason. - Argus Hamilton

President Bush will travel to the Middle East early next month, the White House announced Tuesday.
The trip is expected to include Bush's first visit to Israel as president. News outlets in Israel reported Tuesday that Bush is scheduled to arrive there Jan. 9.

NIE CONCLUDES U.S. HAS SUSPENDED ALL BRAIN ACTIVITIES SINCE 2003

All the Intel agencies (NIE)  have slapped down the Bush claim of Iran pursuing nukes.

No one wants to take the fall for another war we get lied into.

And now Condi and her cohorts have to testify in a lobbyist's spy trial.

Maybe the CIA is connecting the dots in their expected covert way?

Bush was arrogant AND stupid enough to stun our entire Intel community by outing a CIA agent for political revenge and iced it with a pardon. He still doesn't get it. Bush is pitting himself against the CIA.  I'd bet the ranch on the CIA versus Bush.

After all, the CIA has the Intelligence -- Bush doesn't. 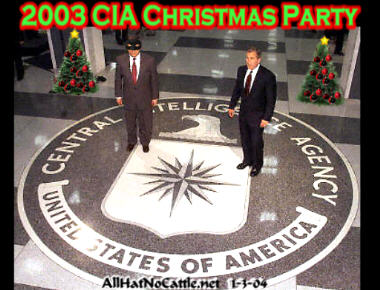 Don Imus returned to the radio airwaves Monday over WABC New York. The country is giving him a clean slate. The fact that he has hired two black sidekicks lets everybody know that he is a changed man and will only tell Mexican jokes from now on. - Argus Hamilton

What Will The New Attorney General Do?

Subject: Scarborough wonders if Catholics are a cult

He asked that on his show today. Idiot.

I'm an atheist and even I know my religious history.

Staying up way too late in Berlin, Germany via satellite

Danke schön, Al. Thanks for watching Joe, so I don't have to.

Joe is the prime example of a poor education, religious or otherwise, in a very Christian right area, Pensacola, Florida.

Oddly enough, in his Wiki bio, it says he was educated in a Catholic school and that he's not Catholic, but neglects to mention was religion he practices.

I couldn't find out what religion he belongs to, but I'm guessing Southern Baptist - Specializing in Snake Handling and Speaking in Tongues

Supreme Court Justice Clarence Thomas says he's shocked when he sees judges reading editorials. "I think that our job is not to be influenced by the media," he says. He isn't. "It is rare, extremely rare, that I ever read about anything that we do in the media," ...

A model wears a mini dress made with chocolate balls by a Swiss manufacturer, London, Tuesday, Dec. 4, 2007. The dress is said to contain over 70,000 calories. Photo/Alastair Grant