A NFL quarterback was sentenced to 23 months in prison for torturing dogs. America tortures humans and wags it's tail.

Dana Perino Explains Her Ignorance of The Cuban Missile Crisis

Attorney General Michael Mukasey refused Tuesday to be rushed into deciding whether he considers waterboarding a form of torture, saying simply he understands the "intense interest" in the issue now at the heart of an inquiry into videotaped interrogations of terror suspects that were destroyed by the CIA.

The Weather Channel reported Monday that ice storms cut power lines and closed schools in the Midwest. Ice was an inch thick on the roads. It was so cold in Iowa that people were showing up at Mike Huckabee rallies just for the fire and brimstone. - Argus Hamilton

The U.S. shouldn't try to kill Saddam Hussein in Iraq, Mike Huckabee declared when he first ran for office. No women in combat anywhere. No gays in the military. No contributions in politics to candidates more than a year before an election.

His statements are among 229 answers Huckabee offered as a 36-year-old Texarkana pastor during his first run for political office in 1992.

The Iraqi government has ordered all policewomen to hand in their guns for redistribution to men or face having their pay withheld, thwarting a U.S. initiative to bring women into the nation's police force...Critics say the move is the latest sign of the religious and cultural conservatism that has taken hold in Iraq since Saddam Hussein's ouster ushered in a government dominated by Shiite Muslims.

I shovel the snow
As Bush blares through my head phones,
Shov’ling something else. 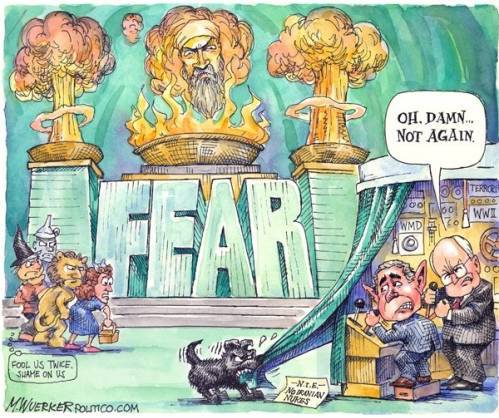 President Bush held a Hanukkah ceremony in the White House Monday where he lit candles on a menorah. You could see the flickering lights in the windows. And that was just in Dick Cheney's office where he was burning the rest of the CIA tapes. - Argus Hamilton

One U.S. senator is holding up legislation that would create a cold-cases unit to track down unpunished killers from the civil rights era...He said he objects to the legislation because of its price tag of $13.5 million a year, believing only $1.6 million is needed. His Web site contains links labeled "Stop Secret Spending" and "Pork Busters."

NEW YORK (AP) _ Four Jewish subway riders who wished other people "Happy Hanukkah" were pelted with anti-Semitic remarks before being beaten, police and prosecutors said. The incident was being investigated as a possible hate crime.

Did you have a good time today?

Please Support All Hat No Cattle