I bet Bush believes in that old saying,  "He with the most toys in the end wins."

"Down in Washington, DC, there was the annual State of the Union address. ... The speech was so dull. Behind President Bush, Nancy Pelosi and Dick Cheney were making out." --David Letterman 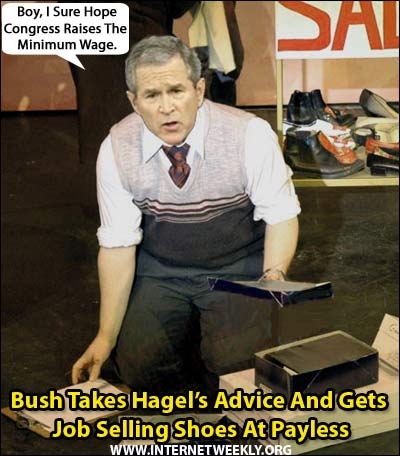 The Most Activist Court Ever

Three of the five Supreme Court justices who handed the presidency to George W. Bush in 2000 say they had no choice but to intervene in the Florida recount...``It's water over the deck - get over it,'' Scalia said, drawing laughs from his audience.

"President Bush addressed the nation tonight. He talked about how we can save energy, how we can still win the war in Iraq and then gave a beautiful rendition of 'Wind Beneath My Wings.' Randy and Paula were in tears." --Jimmy Kimmel

Former FDA Commissioner Lester Crawford's sentencing on charges he lied about his stock holdings was delayed Tuesday over questions about sentencing guidelines...Crawford pleaded guilty in October to charges of having a conflict of interest and false reporting of information about stocks that he and his wife owned. The stocks were in food, beverage and medical device companies that Crawford regulated while head of the Food and Drug Administration

"The president's approval is at an all-time low. ... Say what you want about the guy, but he didn't become president to make friends. He became president because the White House had a bowling alley in the basement." --Jimmy Kimmel

Cathie Martin was expected to testify that in 2003 she told Cheney's chief of staff, I. Lewis "Scooter" Libby, that a prominent Bush administration critic was married to a CIA operative.

Martin's memory will be put to the test. Special Prosecutor Patrick Fitzgerald's first three witnesses told similar stories during the trial's opening days but each conceded a memory problem. One could not actually remember the conversation. Another recalled it differently than when he first spoke to investigators. A third said his memory improved as time went on.

"A guy was kicked off a flight for wearing an anti-Bush t-shirt. ... When he refused to take off the shirt or change the shirt, they kicked him off the plane. Here's the scary thing: it turns out he was the pilot for Air Force One." --Jay Leno

Taxpayers around the country will get an extra two days, until April 17, to file 2006 returns and pay taxes owed, the Internal Revenue Service said Wednesday.

"This is the first year that the president is facing a Democratic-controlled Congress, with the new speaker of the House, Nancy Pelosi, over his left shoulder holding a possible murder weapon. ... I don't envy Bush going to speak to a Democratic Congress. They just finished their bally hoot 100-hour law-passing marathon in -- get this -- 42 hours. There's your hard working Democrats, folks. Hey, we're finished, right? Let's take the next 58 hours off to drop peyote and perform abortions on unwed immigrant teens." --Stephen Colbert

Air America Radio listeners played a drinking game during President Bush's State of the Union speech. Every time he said the word terrorist, they took one drink, every time he said evil, two drinks, and every time he said nothing less than total victory, three drinks. By the time the speech ended, they were voting for him.  - Argus Hamilton

The Vice President is miffed: "Looks like I need to take a few Republican turncoats quail hunting." - Grant Gerver, www.seriouskidding.com 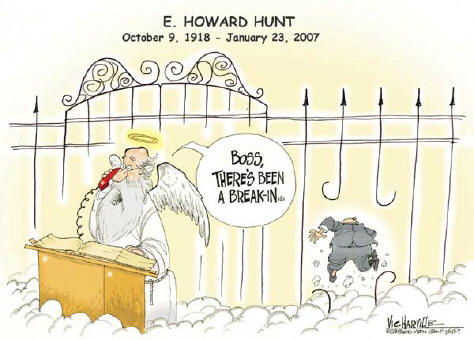 President Bush recognized heroes during the State of the Union address. They included the New York man who threw himself in front of a moving train to save another man's life. Other than that, there were no references to Scooter Libby in the speech. - Argus Hamilton

Please donate so I can put food on my family 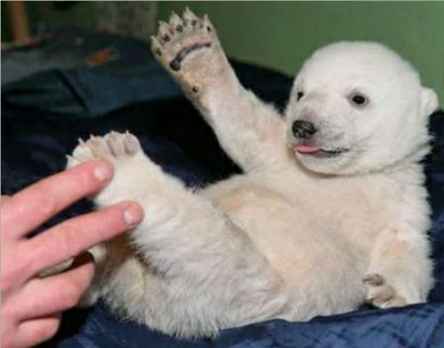 Berlin zoo employee Thomas Doerflein plays with polar bear cub Knut in this picture, released on January 24, 2007. Knut, born on December 5, 2006, has had to be hand fed by Doerflein after its mother Tosca refused the baby. Photo/Berlin Zoo